Chief Green has a Bachelor’s Degree (BAAS) in Organizational Leadership from Texas A&M-Commerce. He has also earned 2 Associate’s Degrees from Weatherford College in Fire Services Administration along with Fire Protection and Safety Technology. Steven has completed the Fire Service Chief Executive Officer (FSCEO) program through TEEX and the Certified Fire Executive (CFE) program from the Texas Fire Chief’s Association. 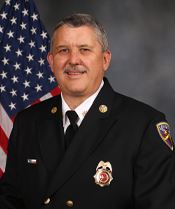 Brian Jones began his fire service career in October 1991. In January of 1997 he joined the Longview Fire Department as a Firefighter/Paramedic. He promoted to Driver/Engineer in early 2000 and was assigned to Station 7 on “A” Shift then to Station 2 with the relocation on the Haz-Mat Team two months later. Upon promoting to Lieutenant in 2003, Brian was assigned to the Training Division as a Training/Safety Officer where he promoted to Captain and eventually transferred to the Operations Division in 2006. He served as a Captain and was assigned to Station 2 in Special Operations until transferring as a Truck Captain at Station 8 from 2011-2016. On August 1, 2016, Captain Jones was promoted to the rank of Battalion Chief and assigned to “C” Battalion 1, housed out of Station 1.  Chief Jones proudly served “C” Shift until his appointment by Chief Steelman to the rank of Assistant Chief of Operations on Aug. 1, 2020, where he remains today serving the 162 members of the Operations Division.

During his career, Chief Jones has completed many academic achievements.  He earned an Associated Degree in Emergency Medical Technology and a 30-hour Certificate in Fire Protection from Kilgore College in 2001. He is a graduate of the Texas Fire Chiefs Academy with certification as a Certified Fire Executive and has attended the National Fire Academy residence programs on many occasions.

Chief Jones has participated in many department activities in his career including Field Training Officer, Special Operations, Hiring Board, Strategic Planning, Recruiting Team, Instructor for the department’s paramedic program, Honor Guard, the Texas Emergency Management Assistance Team, and instructor for the TILS program. He has also served as an instructor for the Northeast Texas Fire School and the Fire Department Instructors Conference in Indianapolis, Indiana. Chief Jones has served as a trustee for the Longview Firefighters Relief and Retirement Fund since Jan. 1, 2007 serving as Vice Chairman.

When not at work, Chief Jones is an avid supporter of Troop 618 where he serves on the troop committee.  He has also served as an instructor for the Kilgore College Fire Academy since 1998. He enjoys fishing, traveling, camping, and spending time with his family. Brian and his wife Debra are the proud parents of four adult children.