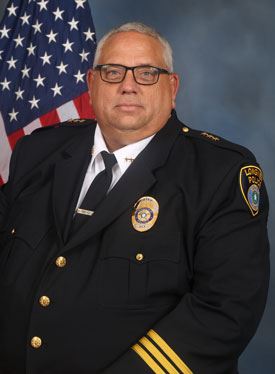 The Longview Police Department is a municipal police agency, located on Interstate 20 in Northeast Texas, serving a population of over 80,000 residents. Our workforce consists of 234 sworn and civilian personnel dedicated to providing professional police services. We are committed to working with our citizens to address issues which affect the quality of life in our community. Programs such as our neighborhood and business watch groups, Citizens Police Academy (taught in both English and Spanish) and our Citizens on Patrol illustrate our commitment to making the City of Longview a safe community to live, work, and visit.
Please enjoy your visit to our web site. Your questions and comments are welcome and encouraged.

A U.S. Air Force veteran, Chief Mike Bishop joined the department in July, 1989 and has worked as a patrol officer, police area representative, and detective in the property division of the Investigative Services Bureau. Chief Bishop was promoted to the rank of Sergeant in February, 2001 and was assigned to the Field Operations Division working on both the midnight and day shifts as a Patrol Supervisor. He has also served over the Crisis Intervention Negotiations Unit. In April 2003, he was transferred to the Administration Division, Internal Affairs until his promotion to Lieutenant in December 2003. After his promotion to Lieutenant, he served as a Watch Commander, Commander of Special Operations, and Commander over Support Services.

Chief Bishop has a diverse background in the operations of the department and is committed to the community policing philosophy while working with citizens and businesses to address crime related issues. Chief Bishop is actively involved in the community through his work in AMBUCS (American Business Clubs), the Miracle League of East Texas, and the Longview Greggton Rotary.

Chief Bishop is a 1999 graduate of the University of Texas at Tyler with a Bachelor’s degree in political science and a 2008 graduate of LeTourneau University with a Masters in Business Administration.  Chief Bishop is a graduate of the Institute for Law Enforcement Administrations 71st school of police supervision in June, 2001 and the 42nd Management Command College in March 2006. Chief Bishop has been awarded several commendations, including a civic achievement award, meritorious conduct award, and he received the “Supervisor of the Year” award in 2002.