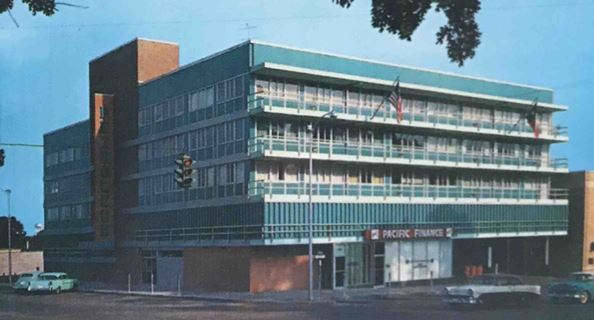 The Petroleum Building is a five-story building, originally constructed as the DownTown Auto Park parking garage in 1953.  This structure was sold to Earl Hollandsworth and Lee Travis on October 20, 1954 for a cost of around $1,250,000.

Earl Hollandsworth and Lee Travis were two influential East Texas businessmen who developed their drilling company, Hollandsworth Drilling Company, into one of the largest such companies in the Southwest region.  Their operations extended into Colorado, Utah, Indiana, Oklahoma, and Louisiana.  By 1954, Hollandsworth and Travis operated under the name of Earlee Industries.  They purchased the DownTown Auto Park, the precursor to the Petroleum Building.

By 1956, this building was converted into an office building.  At the time, the building housed a coffee shop and jewelry store on the ground floor.  Offices were installed on the upper floors and included tenants such as accountants, drilling companies, oil operators, and other oil-related businesses, attorneys, and insurance agencies.  This building was occupied into the 1970’s.

The Petroleum Building is a noted Modern Movement architectural product of the Texas architectural firm Wilson, Morris, Crain & Anderson.  Notable partner in the firm was local architect B.W. Crain who built many buildings in Longview.  This firm was established following World War II.  The firm designed and constructed numerous housing developments, as post-war economic demand surged.  Through the late 1940’s and early 1950’s, the firm graduated from residential endeavors to commercial designs.  Notable works include buildings at the University of Texas and at Rice University, the corporate headquarters of Southwestern Bell, Houston Power and Light, and Texaco, the Houston Post (later Houston Chronicle) building, and the Downtown Houston Post Office, among others.  The firm’s most known contribution was the design and construction of the Houston Astrodome (NRHP 2014).  Other local examples include the Longview National Bank (1959) and a plant and offices for Udell, Inc. (1960).

The Modern Movement in architectural design captures the prevailing thought and advances in technology from 1920 through 1970.  As a discipline, the architecture remained rooted in the fundamental concerns of the interrelation of light, space, and texture; however, practitioners adopted pragmatic approaches as far as designs were concerned.  The movement’s buildings are characterized by straightforward expression, a newfound awareness of the environment, structural honesty, and functional integrity.  Features of this type of design include the incorporation of mass-produced and prefabricated elements, especially when it was to include designs surrounding the every expanding use of personal automobiles.