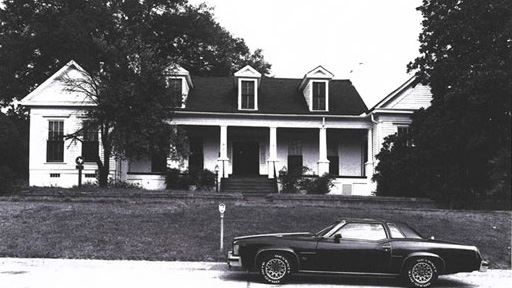 The Whaley House at 101 E. Whaley St. was built for Franklin Lucilius Whaley and his descendants in 1871. F.L. Whaley and his wife were founding members of First Baptist Church of Longview, which is also a Recorded Texas Historic Landmark. Mr. Whaley was a hardware merchant and was later elected mayor of Longview in 1891. Whaley Street, which runs through the “One Hundred Acres of Heritage,” the original Longview townsite, is named for F. L. Whaley.

According to local legend, the Whaley House was the fourth house to be built in the newly platted town of Longview. The Victorian ornamentation and its size were part of the reason it was considered the showplace of town in the 1870’s. Prior to completion of the Gregg County Court House in 1876, Mr. Whaley held Gregg County’s first court in the second story of his hardware store, where it continued to convene until the courthouse was completed. It is believed that the Whaley House is currently one of the oldest standing structures in Longview. The building was occupied by the Whaley family until 1979, when it was purchased for use as a law office and has continued to function as a law office since then.

The Whaley House was built in phases. The first phase of the building was constructed in 1871. Several additions occurred from the 1870s to the 1950s which included projecting rooms added to bookend front porch, a detached kitchen incorporated into the house, dining room addition, replacement of original front porch columns and balustrades, wooden steps replaced with concrete, pantry converted into bathroom, shutters and kitchen chimney removed, floor furnace installed, and front entry sidelights and transom were painted and scored. The last of the construction was completed in the 1980s as it was restored to the 19th century appearance.

The Whaley House is listed on the National Register of Historic Places and designated as a Recorded Texas Historic Landmark.